Send Us A Message

What is a tongue tie and when is treatment necessary?

By Coburg Dental Group / Blog / No Comments
No Comments

There is a developmental fold of oral mucosa (skin of the mouth) which can be found in the mid-line under the tongue. It is a normal part of anatomy, and it is called a lingual frenum or a frenulum.  Most people have one which can be easily seen. However, if it is tight and restricts the functional movement of the tongue we call it a tongue tie.

The frenulum forms during the first trimester of pregnancy. When the head forms, the growth occurs from the sides and the join of the two sides form the frenulum. A frenulum under the top lip often occurs at the same time as the lingual frenulum.

Tongue ties vary in their anatomical appearance, their position relative to the tip of the tongue and the inner aspect of the jaw bone, their degree of tightness and their impact on the function of the tongue. All of these characteristics are taken into consideration when an assessment of a tongue tie is made. 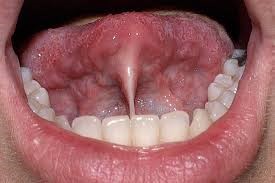 The biggest cohort of patients which we see for tongue tie treatment are babies who have difficulty with breastfeeding or bottle feeding. Mums often experience nipple pain and associated issues such as cracked nipples, mastitis, and bruised nipples.  Baby’s often have a poor latch or are very windy with swallowing too much air or leaking milk.  Poor weight gain, loss of milk supply, needing to top up feeds and more frequent feeding are often issues which parents describe as being issues.

Difficulty with eating a drinking such as gagging, gulping, and food fussiness are also commonly associated with tongue tie. Later in life, we often treat children with speech pronunciation issues or dental development issues where the tie is affecting the eruption of the teeth.

Neck pain and headaches can be an issue so chiropractors and osteopaths may refer patients for a tongue tie release as part of their overall treatment.

People seeking treatment for tongue tie Melbourne at Coburg Dental Group, require a referral from a relevant health care practitioner to ensure that the best possible care is given to the patient. So for example, if a child has a speech issue related to a tongue tie, the referral should come from the treating speech pathologist who has formulated a treatment plan for on-going therapy after the tongue tie has been laser treated.

Any surgical or invasive procedure carries risks. Before proceeding, you should seek a second opinion from an appropriately qualified health practitioner.

5 things you should know about the latest dental procedures